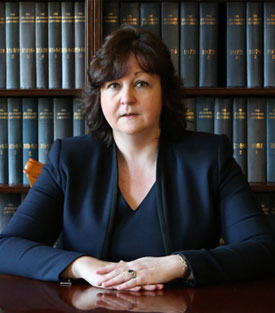 Samantha Bowcock QC was one of thirty women (alongside 84 men) appointed silk at the declaration ceremony held in Westminster Hall on 16th March 2020.   A Manchester University graduate, Samantha joined her present chambers as a pupil. She was called to the Bar in 1990 and is Winckley Square Chambers’ first ‘home grown’ QC.  She is a family and children specialist and regularly appears in the High Court in cases dealing with allegations that death, serious injury or sexual abuse of children occurred at the hands of parents or family members.  Her cases include adoption, acting for children and local authorities in complex cases, judicial reviews involving claims against local authorities and human rights claims for parents and children in public law/social services cases.

Samantha is from a working class background, both of her parents having left school at the age of fifteen.  Her father worked for British Gas and her mother was a cook at Manchester United’s training ground.  The 11+ was abolished the year before Samantha was due to take the examination and she attended a comprehensive school that had previously been a grammar school.  Her parents did not have much money but were “extraordinarily supportive” making it possible for Samantha to be the first in her family to attend university.  They continued to support her whilst she studied for the Bar finals in London (at that time the only location it was possible to do so).  During her vacations Samantha worked as a washer-up at Manchester United’s training ground.

Samantha initially had a broad practice but gradually “family stuff took over” as her strong interest in children in care and adoption cases developed.  After some 15 years, Samantha was getting increasingly bigger cases and her practice was gaining momentum as she found herself frequently working alongside and against QCs.  She began to feel that she ought to apply for silk.  However, Samantha’s partner had died of cancer some years beforehand and she was a single parent.  She therefore waited a few more years until her daughter was away at university and she no longer had to “put being a mum first”.  She originally planned to apply for silk in 2018 but soon discovered that she needed more time to prepare thoroughly and strategically in order to make her best bid for silk.  She was willing to have one further attempt at the competition if her first one was unsuccessful but that would have been all. She would have been perfectly content to continue as a senior junior doing her “extremely fulfilling” cases.  It was what she enjoyed most and had she never, for example, had any desire to apply for part-time positions on the bench.

Samantha said she had to think extremely hard about her cases in terms of the standard of excellence that had to be demonstrated across all of the competences.  Given her specialism, she felt that Competency A (understanding and using the law) might be the most challenging one on which to provide the necessary evidence.  She had to “dig deep” to identify sufficiently complex law but had been able to do so with her work for local authorities on homeless teenagers.   Samantha did not use an outside consultant to help her with her application as she wanted to present her ‘real self’ before the Panel.  And she felt that she did just that at her Panel interview, where the Panel pair gave her the best opportunity to shine.  It was a “good experience”.  Indeed, she found the whole application process to be highly satisfactory from start to finish.

“Delight and surprise” were Samantha’s key emotions on learning that she had been successful on her first attempt at applying for QC.  She was particularly pleased to be able to provide an example of what was possible for junior members of her chambers.  Samantha said her advice to them was “work hard and never give up”.  As a silk she was ready to work even harder than ever.   The silk ceremony was “amazing” – but also “poignant” given that the Coronavirus ‘lockdown’ was to follow so swiftly just days later.  Samantha was accompanied by her family and her senior clerk, and everyone enjoined a fantastic weekend in London leading up to the ceremony.  Due to the lockdown, Samantha’s cases have been pushed back to later in the year although there has continued to be case management and interim hearings.  However, Samantha has no shortage of advisory work which is keeping her very busy in the meanwhile.