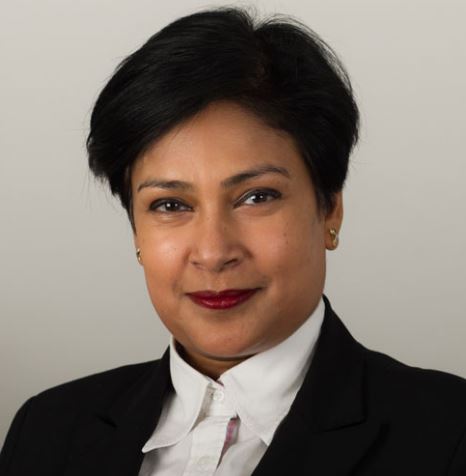 Appointed silk in 2019, Aparna Nathan QC was educated in India, London and Singapore. She came from a community that placed a high premium on academic study and achievement.  Her mother was a specialist doctor (now retired), her late father was an engineer (rising to Vice President of a private Indian company) and her sister was a specialist doctor. Several members of her extended family worked in the legal profession, mainly in India.   Whilst studying ‘A’ levels, Aparna had set her sights on becoming a barrister at the England and Wales Bar.  She undertook undergraduate and post-graduate studies in law (including taxation at LLB and LLM levels) at the London School of Economics.

After Bar School, Aparna applied successfully for pupillage at a specialist tax set and practiced there until 2014, when she moved to Devereux Chambers.  Aparna was appointed to the Attorney General’s Panel of Counsel in 2010 (C Panel 2010, B Panel 2015 and A Panel 2017). This provided her with extensive opportunities to deal with challenging tax issues and working with large teams of people; experience which not only assisted her with meeting a key requirement of the QC competition (Competency C – Working With Others) but also meant that she had experience of completing demanding application forms which stood her in good stead for the lengthy and demanding QC application form.

Aparna decided to make her bid for silk following strong encouragement from her colleagues, particularly from Alison Foster QC of 39 Essex Chambers, who had been her leader in several major tax cases and had provided encouragement and guidance as Aparna built her practice towards the QC competition.  Aparna considered that like many women barristers, she might in fact have been ready to apply for QC one or two years earlier than she did – but she had wanted to be absolutely sure that she was fully qualified across the competencies. In terms of advice for colleagues looking towards a future QC application, Aparna said that it was very helpful to get as much litigation experience as possible, working on both a large number and a wide range of cases.

As to preparing for her QC application, Aparna maintained both her litigation and advisory practices believing both to be important aspects of practice once in silk.  Whereas some in the profession appeared to consider continuous professional development (CPD) as a slightly inconvenient professional requirement, Aparna considered that it was very important, and also assisted greatly when it came to applying for silk.  She advised would-be applicants to download the QC application form three years or more before they intended to apply so that they became thoroughly familiar with the form and could begin to think in terms of populating it with suitable cases and potential assessors.

Aparna believed that it was vital to be involved in wider aspects of tax.  So, for example, she was Chair of the Capital Gains Tax Sub-Committee at the Chartered Institute of Taxation, providing input into government consultations and draft legislation as they arose.  She also co-authored McCutcheon on Inheritance Tax (the leading practitioner text) and contributed to Mellows: Taxation of Trustees and Executors.

More broadly, in working towards making an application for QC, Aparna believed you needed a career plan – ideally at the start of your career, but certainly a good few years before you lodged your QC application.  Aparna said that it had been incredibly important having had her husband and family four-square behind her.  Her husband had often been there “to step into the domestic breach”.  Her two children understood the need for Aparna to work long hours over sustained periods.

For the QC application form for Competency D (diversity), it was not enough to be a member of your chambers’ E&D Committee – she likened that to being a bit like joining a gym; it was pointless unless you were going to be an active member.  You needed to show you were doing something to make a difference.   Diversity was not something that could be applied from outside the profession; real change would come only from change within the profession.  There was, in particular, still a long way to go before the Bar was no longer largely seen as a preserve of those from more privileged social and educational backgrounds. Aparna was personally active in outreach at professional and educational events to encourage suitably bright people who might not otherwise have thought about a career at the Bar to do so.  For women who aspired to the highest levels in the profession, Aparna believed that mentoring was vital; you needed someone to believe in you and give you that extra nudge at crucial stages of your career.

Turning to the QC interview, Aparna said that “you cannot wing it!” She found the biographical notes of the previous QC appointees extremely helpful.  She said she benefited from tuition from interview trainers who, for example, emphasised the need for her to say “I” rather than “we” when talking about personal achievements.  She found the interview a “comfortable experience” albeit at one point she was surprised to find herself getting a “little emotional” when talking about a matter that brought back some particular memories. Aparna said that the interview “is immersive rather than intrusive”.

Aparna’s passion for her chosen field shines through – she talked with genuine passion about tax law, making it come alive for the non-expert.  She said that this was a very exciting time in the area, with no shortage of high level, important cases going to the highest level.

Finally, whilst she was hugely proud and honoured to have been made one of “Her Majesty’s Counsel learned in the law”, she would continue what she had sought to do throughout her career – that is, doing the best for her clients, her colleagues and the profession.